Fish Out of Water

The little stream continued to battle with the Andaman Sea. High tide pushed water into the stream every time a big jolly wave lashed at the shore. And when a gentle wave followed suit, the stream melted into the sea. I walked along the stream to look for its source when I saw them. Mudskippers. They were everywhere. Brown. Speckled. Some golden. Small and big. Everywhere! Dozens of them waddled at the edge of the stream lazily, leaping away when I stopped to observe them. While some stayed at the top edge of the water with just their eyes popping out, others stuck to the bottom of the stream. The source turned out to be a small pond, with more denizens - Hermit Crabs, tadpoles and plenty of little fish. I found the driest spot by the edge of the water and settled down to observe and photograph them, up close.

Mudskippers are fish out of water, literally.They are completely amphibious fish and belong to one of the largest families of fish, Gobiidae. They have the ability to breathe through their skin and also the lining of their mouth. This means that they have to keep their skin moist at all times and that factor limits their habitat to humid and swampy areas. Mudskippers have an enlarged gill chamber which functions like an oxygen cylinder by preserving a bubble of air, helping them breathe while they are out of water. This helps them survive and adapt well to intertidal zones and mangroves. 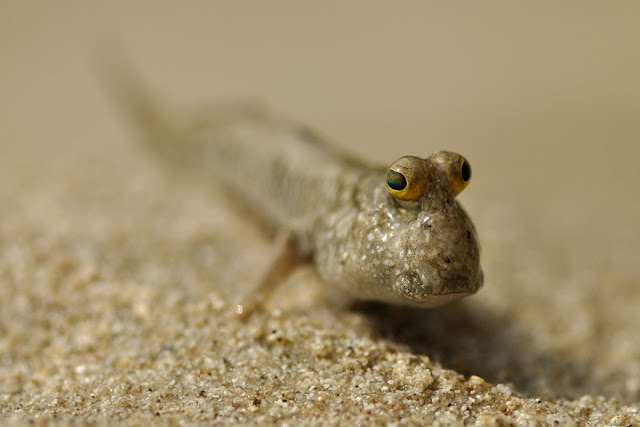 While I sat there, taking in their looks and behavior, they approached me slowly, one skip at a time. A few were just an inch away from me. They were unbelievably curious and bold, staring at me with those big, bulging eyes. And, no, I am not imagining things, they really do stare, hard. Very aware of their close proximity to me, I slowly moved my arm to adjust camera settings and as things turned out, they didn't like that at all. They all leaped away in an instant. Skip up close, stare, jump away at the smallest movement. Repeat. The first few times this happened, an eerie, unsettling memory those little green Compsognathus dinosaurs in the Jurassic Park movie series crept into my head. Dismissing vacuous thoughts of mutant Mudskippers, I went back to work. 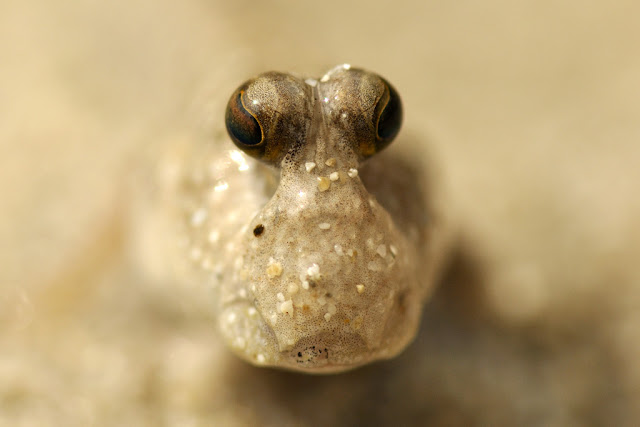 Mudskippers use their pectoral fins to walk on land, in a type of motion that resembles skipping. They use these fins to propel themselves ahead, to hop or jump. In all fish, pectoral fins occur in a pair, and function as forelimbs. And in a highly developed state, these fins enable some species to do very specific actions - they help Flying Fish in their flight and Mudskippers in their walking motion.  Male Mudskippers use their dorsal fins for displays during the breeding season and for solving tiffs. 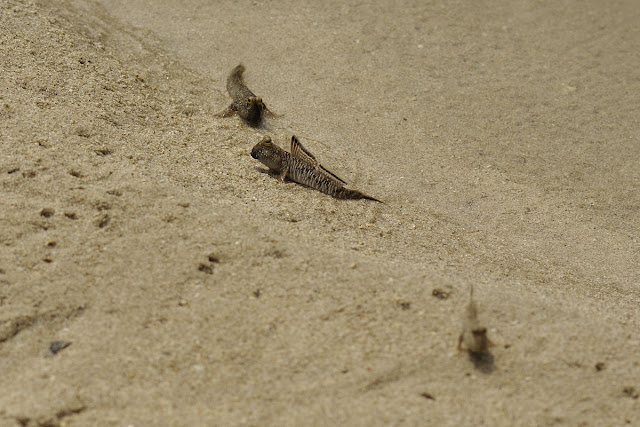 Mudskippers spend a considerable amount of time outside water, on and in the mud. Their social interactions happen outside of water - mating displays, territorial fights, feeding, etc. While I mostly saw them just lazing around, there were a few of them here and there, fighting and feeding. Mudskippers mainly feed on insects, tiny organisms in the mud and small crustaceans. They dig deep burrows into the mud and stay in there at high tide, to avoid predators. They also lay their eggs in these burrows and the males diligently take care of their eggs by bringing mouthfuls of oxygen from the surface till they hatch. 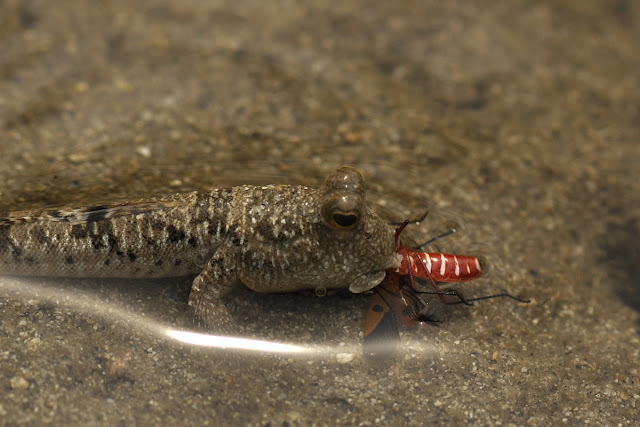 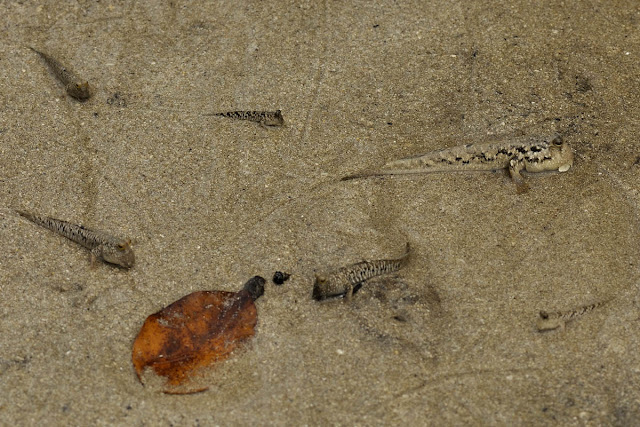 However, the one memory of Mudskippers that will stay with me are those huge, bulbous, protuberant eyes on the top of their blunt heads. And when they sit around staring at you up close, its hard not to notice those fabulous colors -Turquoise, Yellow, Green, Red, Ochre, Black, Gold. 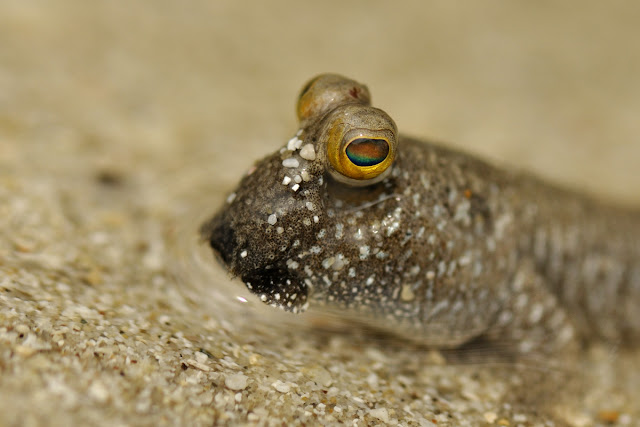 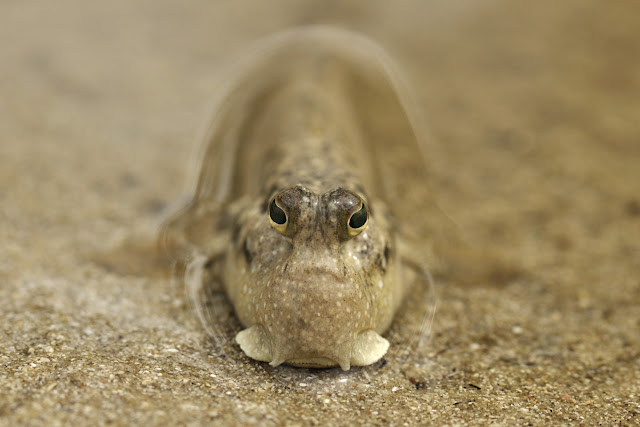 Their eyes are close set and movable. They pull either one or both their eyes into their heads and push them out in a brisk motion, as fast as one can bat their eyelids. It was fascinating to watch their eyes and the things they could do with them! 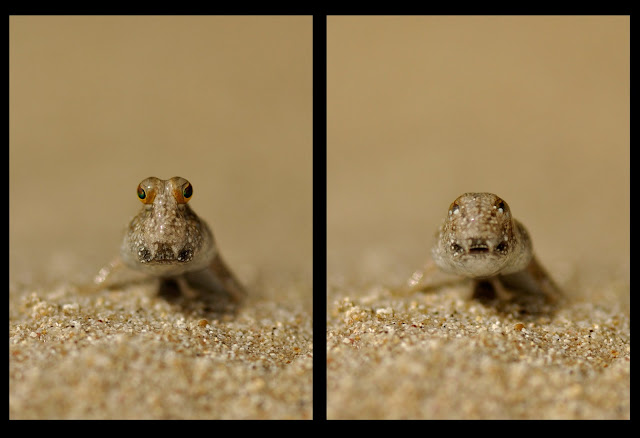 At some point around then I realized that I had lost track of time. My watch told me I had been there, watching these little guys, for almost two hours. But, they were not done with staring at me yet and I wasn't going to be bored anytime soon. Yet, the relentless heat and humidity on the island took a toll on me. All I craved for was to go sit in the sea, with only my head popping out, just like my new found friends. I bid adieu, thanking them for sharing their noon with me, and so graciously allowing me a peek into their peaceful lives. 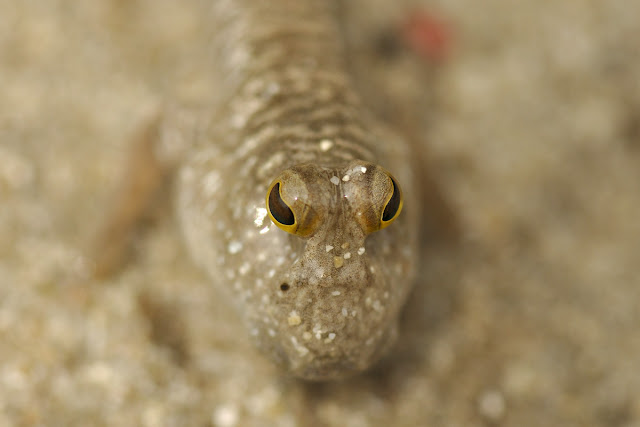 It was a grey, damp evening. But, I had no reason to complain. The friendly neighborhood Shaheen Falcon was visiting again and kept me occupied for more than an hour.

Ten minutes to midnight, I was preparing to sleep when I saw a mix of brown and white fluttering at the edge of the balcony railing. I assumed it was a bat, but the sound of the wings didn't seem like that of a bat's. The fluttering stopped in a few seconds and the mysterious visitor settled down. It was very dark outside, the moon wasn't out in full force yet, and the silhouette hinted at a little bird. I couldn't risk turning the light on, any quick movement could scare the bird. I ran away to fetch my camera and out of desperation, used the on-body flash to take a few record shots first. 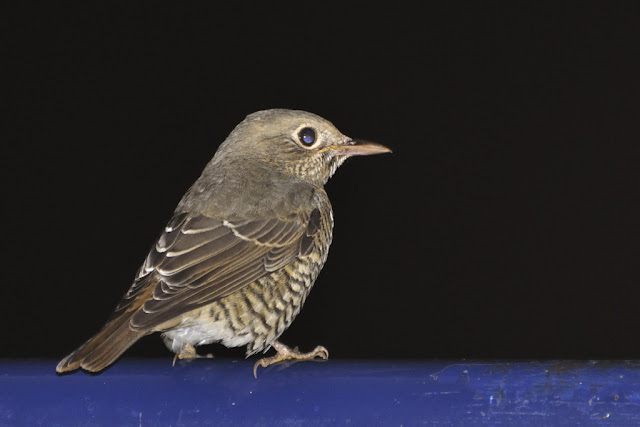 The camera revealed a very pretty little bird with rich brown-black markings on the wings and dark scales on the inner parts of the body and around the legs. Going by the size, shape, posture and the beak, I deduced that it could be a female/juvenile of a Robin/Thrush/Flycatcher, most probably in migration.

The bird was restless initially. It hopped around a couple of times, with its tail slightly up, making a faint krrrk-krrrkk call. It was a little skittish too, courtesy some noisy street dogs far below in the neighboring street. I was hoping that it would find a nice, cozy place and stay the night. And it did, like this -> 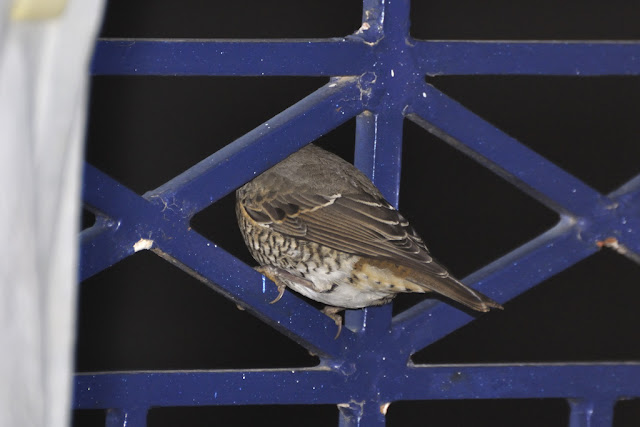 I watched it for 40 odd minutes and while the bird dozed away (I am guessing it did) I scouted for images and illustrations to try and put a name to the face. I sent images of the bird to friends and hit the sack. It was only the next morning when I was able to finally ID the bird, it was a female Blue-capped Rock Thrush (Monticola cinclorhynchus). The excessive markings on the wings and darker scales could be a result of long flights in the migratory season. When I checked in the morning, as expected, the bird had left.

Divya, Sridhar, Karthik and Shyamal - Thank you for your help!

Until next time, when Cinderella hopefully visits me again :-)
Posted by Radha at 9:23 AM 16 comments:

Me on the Web